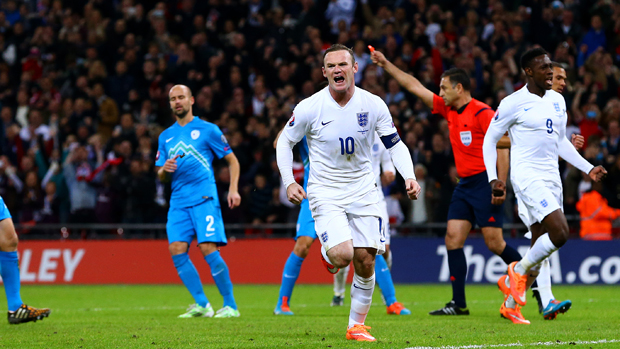 Captain Wayne Rooney celebrated his 100th cap with a goal and a star performance. England came from behind to beat Slovenia, moving six points clear at the top of Group E, and having won their last five internationals. Danny Welbeck scored twice for the Three Lions.

In a sold out Wembley, Adam Lallana and Kieran Gibbs started, with debutant Nathaniel Clyne playing his favoured position at right-back. The early stages of the match saw England pass swiftly, but they could not take full advantage of a disorganised Slovenian defence. Andraz Kirm headed to Hart, striker Milivoje Novaković headed wide, and Rooney’s explosive half-volley flew high into the stands. Raheem Sterling missed a great chance from inside the area, Welbeck missed a header and a fire, but as usual, England’s first half was rather a waste of forty-five minutes, and it brought nothing more than a slow ending. Olegário Benquerença of Portugal brought the dire half of football to an end.

The first action of the second period saw Rooney header over and Phil Jagielka head on target, but the goalkeeper saved well. Under two minutes later, Jasmin Kurtić won a free-kick on the Slovenian wing. As he whipped the ball into the box, England midfielder Jordan Henderson tried to head the ball over the bar. But sadly, he did not get enough on in, and ended up looping the ball over Joe Hart’s reach and into his own net. England had conceded for the first time since Luis Suarez knocked them out of the World Cup.

Almost straight from kick-off, Jack Wilshere played a long ball to Rooney. He jinxed his way into the eighteen-yard box. Escaping a few challenges, he was then caught from behind by large Chievo centre-back Bostjan Cesar. Rooney went down and claimed a penalty, whilst Cesar picked up Slovenia’s only yellow card of the night. The only thing that stood between Rooney and his perfect night was Inter Milan goalkeeper Samir Handanović. His penalty-saving record is astounding, having stopped the last five he has faced. Something suggested Rooney would not dare place this one, and in fact he walloped it. Handanović got a generous hand on it, but could not prevent an immediate equaliser. Forty-four goals in a century of international caps is not bad for a player that is not a typical striker.

Seven minutes later, a Kieran Gibbs through in was volleyed into the box by Liverpool’s Adam Lallana, winning his twelfth cap. Henderson controlled the ball but passed wide to Sterling. Lallana made a run to meet Sterling. The Liverpool duo combined nicely, and Lallana’s deflected strike came off the leg of Handanović. It reached in-form striker Danny Welbeck who scuffed a volley from range. It looped past the defence and into the corner of the net. Just nine minutes after going behind, England led the ‘The Fantje’. Six minutes after that Roy Hodgson’s men were in again. Gibbs played the ball to Welbeck on the left side. He passed to ball to Raheem Sterling who tucked it back to him. The Ghanaian-born striker found himself one-on-one with the goalkeeper. Taking the ball under control, Welbeck slotted the ball past Handanović and into the net. The scoreline was a good one. The match ended England 3-1 Slovenia.