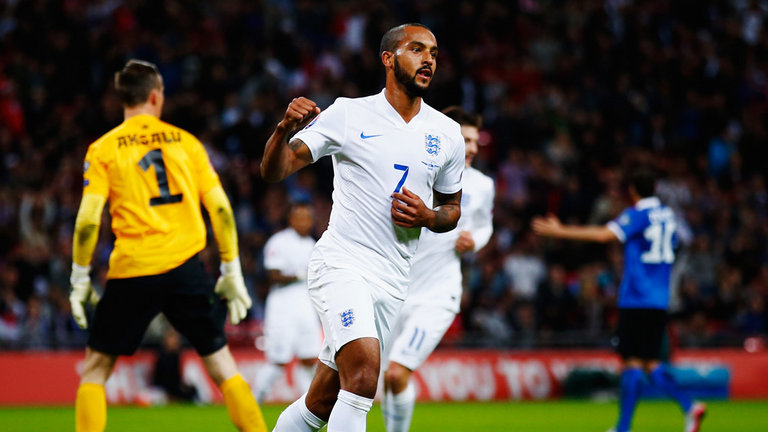 Injured Wayne Rooney received his Golden Boot in front of a packed Wembley Stadium as England made it nine wins from nine in Group E. Theo Walcott and Raheem Sterling did the damage with goals at the end of either half. A strong defensive display, spearheaded by skipper Gary Cahill, ensured the visitors were unable to muster a single shot on target.

With Wayne Rooney, Danny Ings and Michael Carrick nursing injuries; John Stones unavailable for the same reason; and Daniel Sturridge not called up to guarantee full-fitness, Roy Hodgson sensibly fielded a team with a mix of reliability and also youth for his penultimate qualifier. Ryan Bertrand appeared for the first time in the campaign, and Ross Barkley started behind Liverpool’s Adam Lallana.

After two early replayed corners nearly resulted in an England goal, the Three Lions gained their third of the night not soon after. The set piece was a deep one and Cahill did well to chest it down and play a volleyed pass along to Walcott. The Arsenal man hit an audacious volley almost too well as the goalkeeper Mihkel Aksalu produced a splendid parry. A few minutes later, as Clyne found Liverpool teammate Lallana, the midfielder turned and picked out the approaching Barkley. The Everton man was able to find a scuffed shot which was gobbled up by the goalkeeper. Barkley’s penalty appeals were quite rightly waved away by referee Istvan Vad.

The next chance saw Sterling find Bertrand on the left wing. His cross was punched away by Aksalu, and Barkley’s follow up shot was gathered well by the SJK keeper. Soon after, some lovely interchanging play between Walcott and Clyne led to Sterling on the ball on the opposite side. His whipped effort would have found the top corner had it just curled inside a further metre or two. The first long-range blast of the night came from the right boot of James Milner. The midfielder’s laced effort dipped in then out but flew across the by-line aimlessly wide.

As the England dominance slowed down a notch, James Milner produced an interception and pass all in one kick. Walcott gratefully received the ball and weaved between two defenders before dragging a shot a wide. A corner, earned by a deflected Barkley strike, ended with a deflected Walcott strike. The Arsenal man found room, but a crucial block was made by the defender Teniste. The following corner was headered clear but Milner’s effort was thumped back in and drove just over the crossbar. Deep into injury time of the first period, Barkley turned a defender before slotting a deliciously accurate through-ball into the six yard box. How onside Walcott had sped so far ahead of his man is a mystery, but he controlled before slotting a tucked effort over Aksalu’s leg and into the side of the net. Roy Hodgson’s men led, with the last kick of the first half.

The final forty-five’s first chance came in the form of a free-kick. The kick was taken short by Milner, and Lallana fired it against the diving hands of Aksalu. Harry Kane received the ball, but Aksalu denied him from point-blank range. As yet another England counter reached the edge of the box, some outrageously skilful footwork from Barkley again, saw the Everton man create his own space for a shot. He took the chance and pummelled the ball inches wide from the top right corner. As midfielder Ats Purje took the ball on a rare Estonia attack, Chris Smalling seemed to bundle the midfielder to the ground, but as he ran way with the ball the referee thankfully waved play on. After Nathaniel Clyne had ruined a manned attack by firing a long-range effort wildly over, Sterling’s pass to Barkley saw the youngster repeat the same skill, again to the same effect, and this time his rifled effort was wonderfully pushed wide by the clearly very acrobatic Aksalu.

The next chance was all about Manchester City’s Raheem Sterling. The winger cut inside from a darting run, but his whipped effort just wasn’t curling enough. The second goal came minutes later. A long lump up the field by Smalling was headed on well by Kane. Substitute Jamie Vardy ate up the ground on the eventually floor-bound Teniste, before driving meaningfully at the goalkeeper. Unselfishly, he squared the ball to the man-handled Sterling. But Sterling slid in and passed the ball into the top of the net. Finally the score-line looked more respectable. There was time at the end for a meaningless debut. Tottenham’s teenager Dele Alli came on for the final three minutes, but the chances had gone by then. The match ended England 2-0 Estonia.