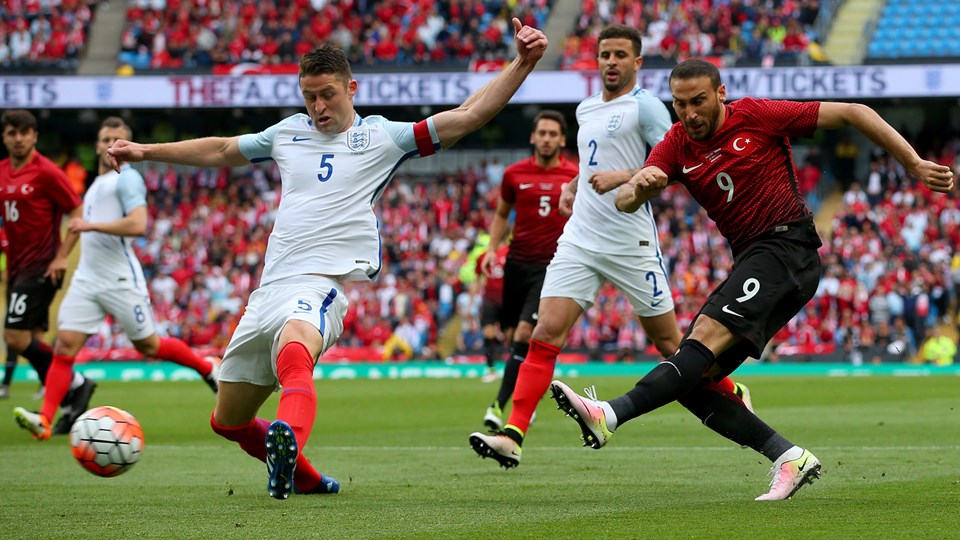 The much talked-up partnership of Harry Kane and Jamie Vardy got off to a perfect start in England’s first warm-up match, against Turkey. The strikers converted one chance each in a game that saw England’s defensive vulnerabilities highlighted by Hakan Çalanoğlu scoring Turkey’s first ever goal against England. For the first time since the reconstruction of Wembley Stadium, a different English ground hosted a home match: Manchester City’s Etihad Stadium.

With Danny Welbeck’s injury preventing his participation in Euro 2016, Harry Kane and Jamie Vardy made the nation’s wishes a reality as they formed what will surely prove a formidable strike-force at the championships. With England’s Manchester United and Liverpool players resting after their respective finals, only the previously injured Jordan Henderson linked up with the squad. The Three Lions’ first warm-up match for the tournament also brought a long-awaited return to international football for Jack Wilshere. Danny Rose and Kyle Walker started at full-back.

Not even a minute into the match, Harry Kane received possession from a miss-placed Turkey pass. He ran at the defence and played a silky pass into the path of Jamie Vardy. The striker stretched dramatically to reach the ball, but it ran away and the chance was gone. It was just a minute and a half later that England took the lead. As Kyle Walker and Jack Wilshere won successive headers, Raheem Sterling fed Dele Alli. The mercurial midfielder shifted the ball and nut-megged a mesmerised defender. The final touch opened up a pass to Harry Kane. Later adjudged to be marginally off-side, the striker slammed in his fifth England goal, past the helpless hands of the diving Volkan Babacan.

Very soon after, a cross was squeezed through to the England box from a tight angle. Midfielder Ozan Tufan came in and shot low, but there to block it superbly was Kyle Walker – energetic throughout. But once again, it was just minutes before another chance fell, and it fell the visitors’ way. Midfiedler Özyakup completed a beautifully weighted pass behind the England defence. John Stones failed to clear the danger, leaving Joe Hart no choice but to rush from his goal. Volkan Şen clipped the ball over Hart and crossed. Bayer Leverkusen star Hakan Çalanoğlu volleyed low and into the net. Turkey’s historic moment was celebrated emphatically. The players wheeled away in celebration of the nation’s first goal against the Three Lions in eleven attempts. The midfielder’s sixth international goal was his sixth against European nations. Eric Dier sent a bulleting header wide of the goal before the half-time whistle blew. The first chance of the second half fell to Turkey. Cenk Tosun, the tall muscular striker from Beşiktaş, received a powerful pass at the edge of the box. With his back to goal, he turned quickly and shot immediately after. A neatly struck effort was unlucky not to clip the post.

It was a while after that a mistake by Mehmet Topal led to Jamie Vardy’s first chance to run at the Turkish defence. Felled in the box by Topal, the referee gave an immediate penalty, which, on second viewing, looked rather lucky for Roy Hodgson’s men. Harry Kane stepped up to convert his second of the evening, but his well-struck effort sliced off of the left-hand post and wide. England had missed a penalty in normal time of an international for the first time in the last eleven spot-kicks. As England ramped up the pressure late on, they won a corner with eighty-two minutes on the clock. Gary Cahill’s charismatic header caused all sorts of problems for the Turkish defence. Goalkeeper Babacan brought down defender İsmail Köybaşı as they both swung for the ball. Running to pick up the pieces came Vardy, and his tight-angled strike rebounded off of the keeper’s head before hitting the back of the net. Vardy led the celebrations; England were close to victory over Turkey – undefeated in eighteen months.

Soon after, a lovely floated Danny Drinkwater pass was latched onto by club teammate and goalscorer Vardy. His unselfish pass to strike-partner Kane left the Tottenham man in all kinds of space. Unfortunately though, he slipped as he stepped up and his shot whipped just wide of Babacan’s far post. With three minutes of stoppage-time almost over, it was England who were hanging on as Turkey pressed hard at the Etihad. Köybaşı sent a hopeful ball into the box, which ended up being pin-point for fellow substitute Olcay Şahan. The number ten side-footed a well-placed volley beyond Joe Hart’s body, but the goalkeeper tipped the ball wide with what was an outstanding save. John Stones cleared the danger, and after Turkey failed to profit from two further corners, the full-time whistle blew. It ended England 2-1 Turkey.